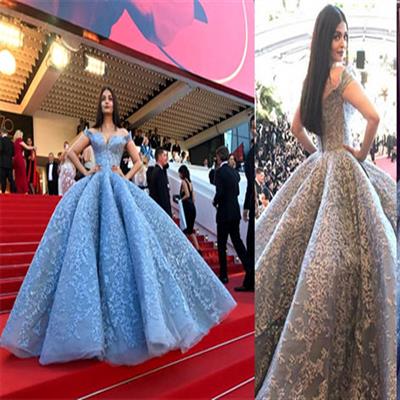 From the Red Carpet to the Red Woman to the Red Queen. In a break from tradition, Indian superstar Aishwarya Rai Bachchan walked the Red carpet at the Cannes Film Festival in a fiery red Ralph & Russo strapless gown. This was the actor’s second red carpet appearance at this year’s festival and she teamed her outfit with a pair of danglers.

Aishwarya Rai first made her appearance at Cannes in 2002 to present her film "Devdas". As the face of the cosmetic brand L’Oreal Paris, she soon became a regular at the gala. For her first appearance at the film festival this year, Aishwarya picked a sheer green tiered ensemble by Yanina Couture and was even spotted posing with model Eva Longoria in an off-white floral gown. But it was her blue Cinderella inspired ball gown with which she walked the red carpet on Day 2, which had the world media rooting for her.