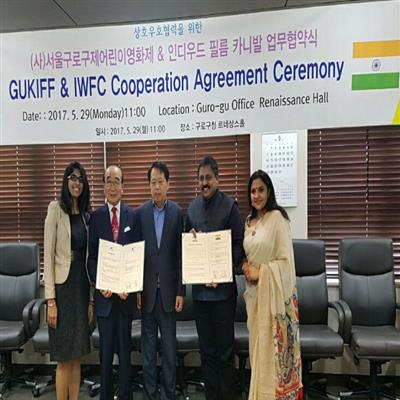 The much acclaimed Seoul Guro International Kids Festival, also known as GUKIFF, has joined hands with Indywood Film Carnival (IWFC) to cooperate and benefit through mutual collaboration of culture, expertise and knowledge between the two international film festivals.

The Cooperation Agreement to this regard was signed on 29th May 2017 during the GUKIFF Festival held at Seoul, in the presence of Mr. Sohan Roy, Indywood Founder Director, and Mr. Lee Sung, the Mayor of Guro City of Seoul Metropolitan Government in Seoul, South Korea.

Speaking on the sidelines of the event, Mr. Han Ki Kim, Executive Director of GUKIFF said, “We are proud to associate with India and Indywood Film Carnival. We believe that the association will be a game-changer in the international movie arena. The bilateral collaboration will help elevate Indian Film Industry to new heights in the coming years.”

Delegates from South Korea’s film industry will be attending Indywood Film Carnival 2017 to be held at Ramoji Film City, Hyderabad, from December 1 to 4. During the visit, they will explore the possibilities of movie co-production, investment opportunities, talent scouting, content distribution and software support for transforming Indian Film Industry as part of the $10 billion Project Indywood.

Project Indywood is eyeing tie ups with 100 countries and 200 festival associations across the globe in the next five years. “Almost 25 per cent of the target has been achieved in the first year itself. With the support of technology giants like Korea, we can accelerate the growth of the Indian Film Industry to the next level by 2020,” said top officials of Indywood.

Some of the salient features of the Agreement include:

The Seoul Guro International Kids Film Festival was founded in 2014 with an objective to present the best of contemporary and classic film for children, youth and families produced in every part of the world. Films are selected on the basis of quality and originality. Preference is given to films not previously screened at a festival in Korea. GUKIFF also promotes networking opportunities between industry professionals and educators, to highlight the role that cinema plays in the education and enrichment of young minds.

Some of its competition categories include:

Indywood Film Carnival is the flagship event of Project Indywood, a $10 Billion visionary approach made up of 2000 corporates and investors, to unite Indian cinema and take it to the world.

As a premier film fest and tech expo, the Indywood Film Carnival is held annually at the world’s largest integrated film park, Ramoji Film City, in Hyderabad, India. The 3rd edition will be held from Dec 1-4, 2017.

The carnival is a representative platform for showcasing the entire gamut of cinema making, ranging from pre-production to skill development, production, technical support, post-production, distribution, marketing and release among others.

The Indywood Film Carnival is made up of 4 standalone verticals conducted in parallel to achieve its aim as a premier film event: